If you are as old as me, you may have heard stories or even experienced what the Sunset Strip was like in the 1970s. It was a haven for music lovers and rock bands. It’s still a happening place and some of the old haunts still exist. But, perhaps, they’re not quite as wild as back in the day.

The Sunset Strip runs from Marmont Lane near the famous Chateau Marmont to the edge of Beverly Hills at Phyllis Street.

During the 1930s through the 1950s, the Sunset Strip was a glamorous thoroughfare and playground for Hollywood stars. Many of its nightclubs were run by gangsters such as Bugsy Siegal and Mickey Cohen. It was the home of Ciros, the Mocambo, and the Trocadero. Schwab’s drug store was on Sunset just east of the strip.

The Chateau Marmont is a 1927-era hotel designed by architects Arnold A. Weitzman and William Douglas Lee to resemble the French Château d’Amboise. It was originally an apartment building but became a hotel in 1932 after the summer Olympics in Los Angeles and features rooms with kitchen suites and living rooms.

It’s always been a popular place for celebrities and other creatives to stay. I starred in a movie in the mid- 80s with Ruth Gordon and singer Laura Branigan.  After the film wrapped, we all got in Laura’s limo and had a party in her room.

I got drunk and threw up there so I can say I threw up at the Chateau Marmont. LOL! I remember it being a little run down in a cool sort of way. Compare it to staying in an old hotel in Paris.

Once the exclusive Ciro’s restaurant, the Comedy Store opened on the Sunset Strip in 1972 and was owned by Sammy Shore and Rudy De Luca. Two years later, Sammy’s ex-wife Mitzi became owner as a part of their divorce settlement. All the major comics then and now have played there including Robin Williams, Richard Pryor, Billy Crystal, David Letterman, and hundreds more. After Mitzi’s death in 2018, ownership was taken over by Mitzi’s family trust.

The Whisky a Go Go

The Whisky a Go Go opened on the Sunset Strip in 1964 as a nightclub and performance space for live bands. It is also where Go Go dancing became popular. The venue was central in promoting emerging bands such as The Byrds, Buffalo Springfield, Janis Joplin, The Doors, and Frank Zappa during the 60s. And it’s still rockin’ to this day with plenty of hard rock, biker dudes, and a plethora of tattoos.

The Roxy has operated as a bar, theatre, and nightclub since 1973. I am proud to say I saw the original stage production of Rocky Horror Picture Show there starring Tim Curry before the iconic film was made in 1974. Others who have performed there include Pee Wee Herman (Paul Reubens), Bob Marley and the Wailers, The Ramones, Guns N’ Roses, and Neil Young, among others.

Only the super cool are admitted to its private bar upstairs called On the Rox.

The Rainbow Bar and Grill

During the 1970s, The Rainbow Bar and Grill was the place to be seen if you were a hot band or groupie. It opened in 1972 and regulars included everyone from Ringo Starr and John Lennon to Mickey Dolenz and Alice Cooper.

I managed to get admitted to its private Over the Rainbow club with some girlfriends. The rule was, if you were cute, you got in, and because I was in my early 20s at the time, I made the cut. I ordered a bottle of chardonnay and went to the ladies’ room. When I came back and took a sip I suddenly felt loopy and started tripping over the tables. I had been roofied, probably by the two guys sitting next to me.

Once, when I was there in the 70s I saw women flashing men as they walked by. Those were the days, right?

The Rainbow is still a cool place to hang out and has a lush red interior with rock nostalgia all over the walls.

I ate there recently with friends on their outdoor patio. The waitresses are still a bit surly, but we were served by a manager and our burgers were yummy.

Actor River Phoenix met his demise at the Viper Room from a drug overdose. The club was once owned by Johnny Depp and is now an event space for performances and special events. It opened in 1993 and is styled like a Harlem 1920s jazz club.

A statue of Bullwinkle the Moose has stood on the Sunset Strip since 1961. It was originally in front of the Jay Ward Studios which is no longer there. The statue was taken down in 2013 but the neighbors missed it so much that it was reinstalled on a traffic island to greet visitors as they drive by.

Other places of interest on the Sunset Strip

Gone are The Old World Restaurant, Gazzarri’s on the Strip, Pandora’s Box, the London Fog, the Playboy Club, and House of Blues but you can still have fun, eat well and enjoy your time on the illustrious Sunset Strip.

If you are in the mood for a hot dog, stop at Carney’s. The restaurant is a real Union Pacific Locomotive Train Car that serves hotdogs and burgers. Also, consider eating at the Saddle Chop House, Pink Taco, The Tower Bar in the deco-style Sunset Tower Hotel (1929), and the State Social House.

Shop 50 unique stores and boutiques at Sunset Plaza as well as dine in some of their restaurants.

There are public parking lots along the Sunset Strip that range from $10 – 15 for the day. You may want to consider taking an Uber, Lyft, or bus instead.

Hotels near the Sunset Strip include The Mondrian which has a Sky Bar with a spectacular view, Chateau Marmont, The Edition, The London, Sunset Marquis, 1 Hotel Sunset, The Sunset Tower, and Best Western.

The Andaz West Hollywood Hotel has a wild history. It used to be the old Hyatt Hotel once known as The Riot House because rock stars would throw their TVs out the window and get wild. I stayed there once. Now it’s luxurious and a lovely place to stay with a rooftop swimming pool.

For more things to do near the Sunset Strip, click here. 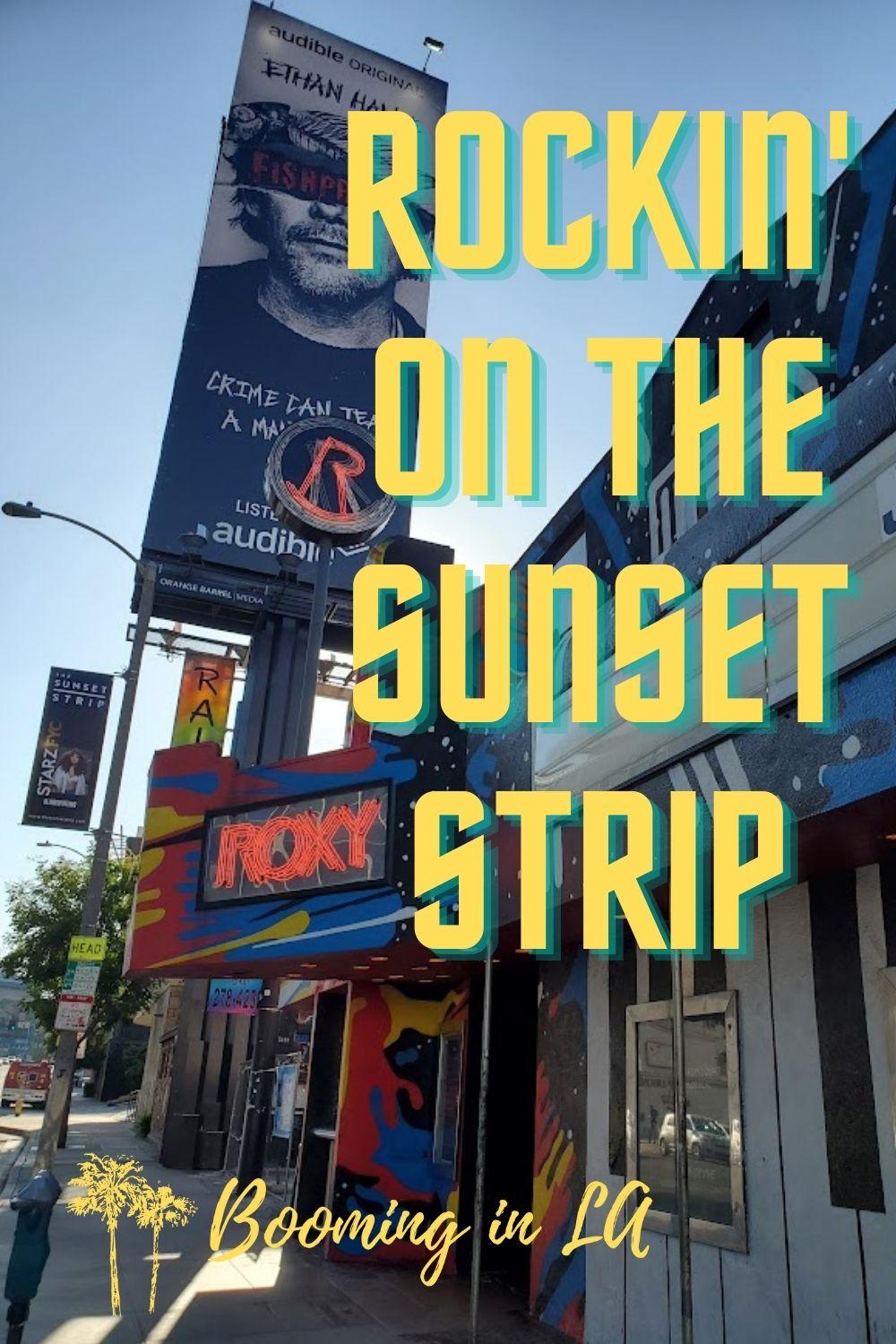